I texted a friend in Atlanta the other day and told her I was testing a new gluten-free recipe for chocolate pumpkin whoopie pies, and her response was, “what’s a whoopie pie?” 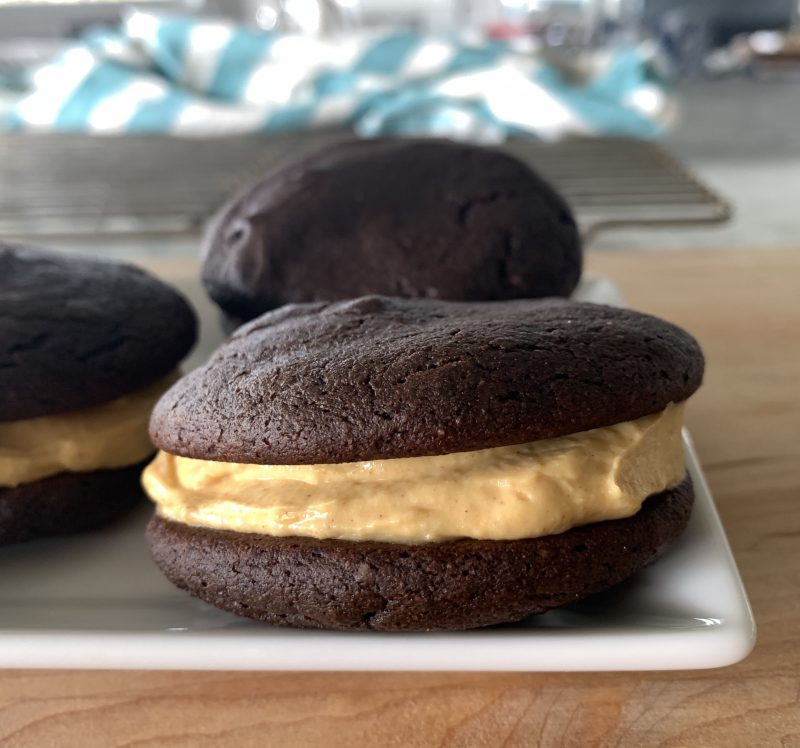 It turns out that whoopie pies are unique to New England and Pennsylvania. As a resident of Massachusetts, whoopie pies are pretty commonplace around here, but they are unfamiliar to people pretty much everyone else. Whoopie pies are a hand-held dessert made with two soft, round cake-like cookies, and they are filled with vanilla buttercream frosting and marshmallow fluff in between. While they are similar to an Oreo cookie in shape, they are bigger and softer, and the filling is creamier. 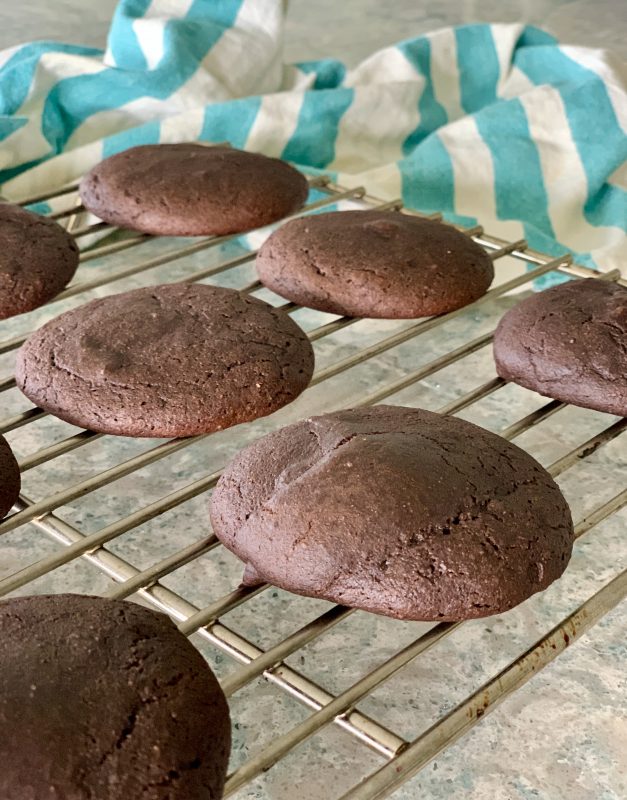 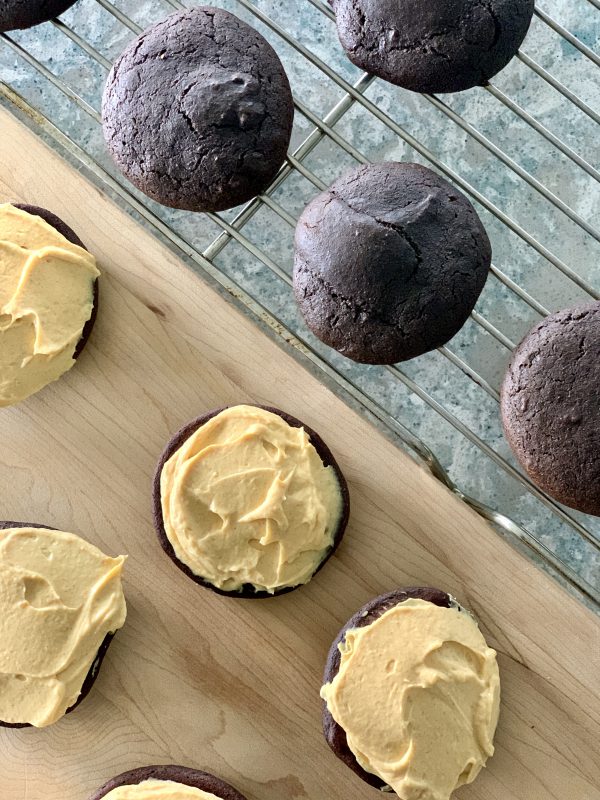 My dietitian riff on whoopie pies takes them in a new, healthier direction. For this recipe, I created gluten-free cookies with almond flour and Bob’s Red Mill gluten free 1 to1 baking flour, and I added puréed pumpkin to the cookie batter (it’s autumn and Halloween after all) to eliminate the need for added butter or oil. For the filling, I simplified and healthified things by using light cream cheese, pumpkin, and just half a cup of powdered sugar. 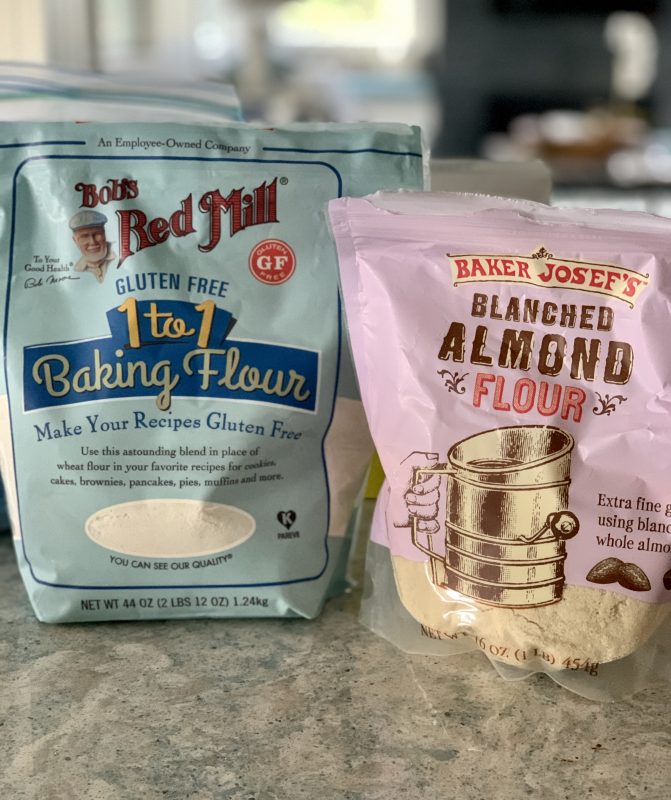 My whoopie pies are easy to make, lighter in fat and calories than the traditional treat, and they contain fiber and vitamin A from the puréed pumpkin. 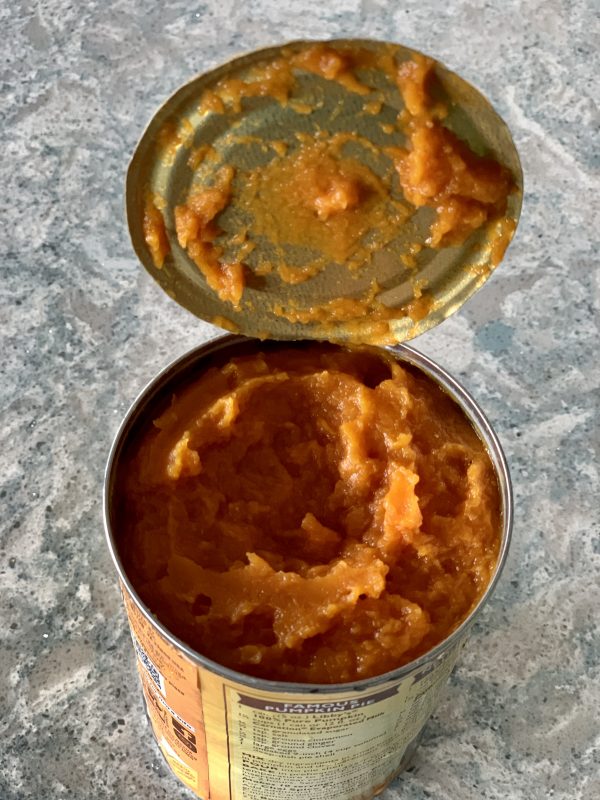 When it comes to canned pumpkin purée, I’m a super fan. Here’s why:

– It’s nutritious. One serving (1/2 cup) has 3 grams of fiber, a day’s worth of vitamin A (which supports a healthy immune system), zero added sugar, and just 45 calories

– It’s versatile. If you search my blog, you’ll find all sorts of recipes that call for pumpkin purée including my Pumpkin Maple Pancakes, Pumpkin Turkey Chili, Black Bean Enchiladas with Pumpkin Sauce, and Gingersnap Pumpkin Mousse.

– Leftover pumpkin purée can be portioned out, placed into resealable plastic bags, and frozen for later use.

I created a similar whoopie pie a few years ago and it’s been a favorite with my friends at Kids Cooking Green for their hands-on cooking classes (in person and now via Zoom). I decided to simplify and streamline the recipe this year and to also make it gluten-free so those who follow a GF diet can also enjoy it.

I love this gluten-free version of my favorite whoopie pie recipe made with gluten-free 1 to 1 baking flour and almond flour. This recipe is surprisingly simple, and it's a kid (and adult) fave! Pumpkin makes its way into both the cookie dough and the filling.
Ingredients
For the Cakes
Instructions
3.5.3251
Let me know if you give these whoopie pies a try. They do not disappoint!

Buy now!
Instagram
I made this light and luscious Brussels Sprouts Gr