All you need for these fuss free, gluten-free cheesecake cupcakes are a few simple ingredients including light cream cheese, an egg, sugar, lemon zest, oats, and walnuts. Cheesecake Cupcakes with Oat & Walnut Crust are a hand held and better-for-you mini treat that you can top with Greek yogurt, fresh berries, and mint. They look oh-so fancy, but they’re surprisingly easy to make.

Cheesecake has a reputation for being really rich, and I’ve never been a big fan. But my slimmed-down mini cheesecake creations won me over for several reasons. For starters, the oat and walnut layer on the bottom is healthier than a traditional butter-laden crust.

I created the crust with half a cup of old-fashioned oats and half a cup of walnuts. I placed them in a mini food processor and processed until the mixture resembled course sand. I added just 1 tablespoon granulated sugar, half a teaspoon ground cinnamon, and a tablespoon each of extra virgin olive oil and butter. I gave the mixture another quick whirl in the food processor until everything was combined. (If you have coconut oil in your pantry, you can use that in the crust instead.)

The cheesecake filling is lightened up as well, and it’s also super easy to make. In a bowl, just whisk or beat together light cream cheese, a quarter cup granulated sugar, 1 egg, lemon zest, and vanilla extract. 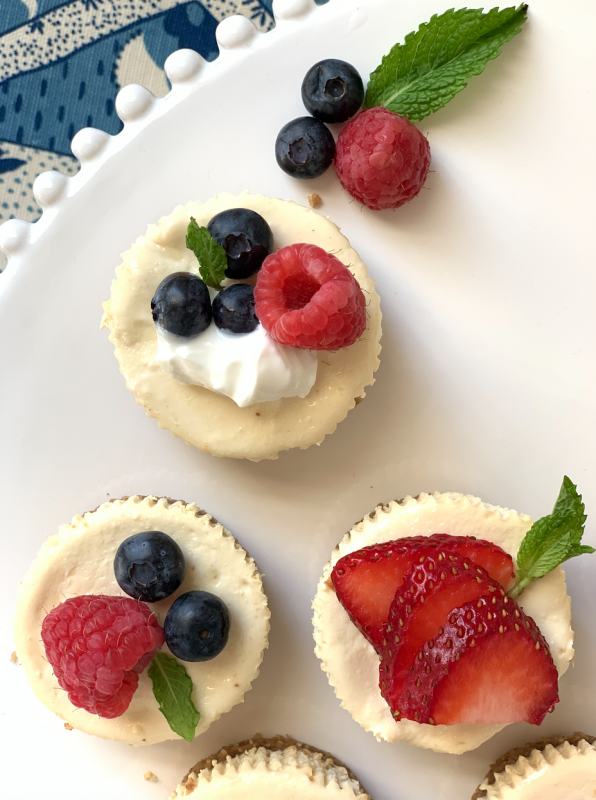 Cheesecake Cupcakes with Oat & Walnut Crust is a lightened-up version of traditional cheesecake. Decorate the tops with Greek yogurt and fresh berries for a festive touch

I'm a dietitian, but that doesn't mean I don't love dessert. I just prefer lightened-up versions. If you really want to fancy these up, add a dollop of plain Greek yogurt on top, a medley of fresh berries (strawberries, blueberries, raspberries), some shredded coconut, lemon zest, a drizzle of agave, and mint.
Ingredients
Crust
Filling
Optional toppings
Instructions
3.5.3251
Kid cooking tip: Set out a bunch of toppings and let the kids decorate their own cheesecake cupcakes. 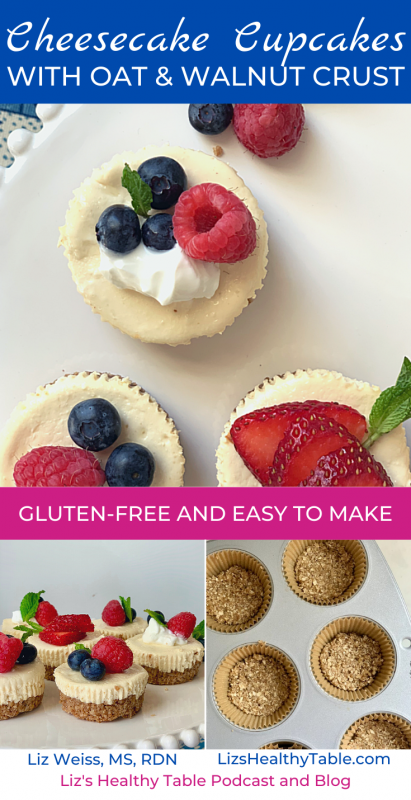