Classic panzanella salad is made with tomatoes and chunks of stale (or toasted) bread. Other components include onion and fresh basil. I gave this  tasty Tuscan salad a new and even more nutritious fix by adding some extras including mozzarella cheese, paper-thin slices of English cucumber and radishes, juicy diced watermelon, and mint. I left the onions out since my kids don’t love ’em!

Every month, I join other like-minded healthy food bloggers for The Recipe Redux cooking challenge. This month, we’re all celebrating ReDux’s 5th birthday by celebrating each other. For the challenge, I was asked to pick a fellow ReDuxer by going to their blog and either making one of their recipes or creating a recipe inspired by theirs.

I chose a recipe for Portable Cherry Caprese Panzanella Salad, created by Deanna Segrave-Daly, RD. Deanna is a Philadelphia-based registered dietitian, food blogger, and co-founder of The Recipe Redux. She blogs with her dietitian partner, Serena Ball over at Teaspoon of Spice where you’ll find fast, healthy, family-pleasing recipes — the kind of food I like to make too. I discovered Deanna’s Portable Cherry Caprese Panzanella Salad when she featured it on one of her Facebook LIVE broadcasts. (If you haven’t seen any of Deanna’s Facebook LIVE broadcasts yet or her Healthy Kitchen Hacks, be sure to check them out.) I loved the panzanella-with-fruit idea so much that I decided to give classic panzanella salad my own unique spin by adding watermelon, cucumber, radishes, mint, and mozzarella. I’ve made this recipe two times in the past week, fed it to family and my interns (I have three nutrition students working with me right now!), and I plan to make it over the July 4th weekend as well.

This salad says summer to me. It’s juicy, crunchy, creamy, sweet, light, and refreshing. I served it as a main dish, but this salad could easily do double duty as a side dish.

For me, the watermelon and mint really make this salad special. You could also add blackberries or raspberries. Red onion or thin slices of green onions would also work really well in the mix.

Thanks for the inspiration Deanna!

I don't like to heat up my kitchen in the summer, which is why I turn to salads like this one. Plus, salads can be super nutritious. For my panzanella salad makeover, I use whole wheat bread versus white, add fresh mozzarella cheese for satisfying protein, and load up on the produce by going above and beyond the tomatoes, which you'd expect in a panzanella salad: English cucumber, radishes, watermelon, and mint.
Ingredients
Instructions
3.5.3226 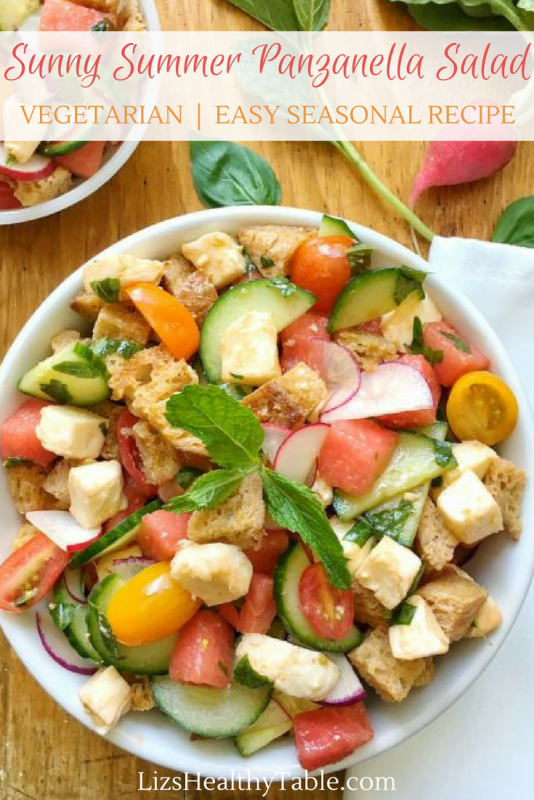 Check out all the other Recipe Redux creations this month!