The city of Amsterdam is home to Rembrandt, the Anne Frank House, more bicycles than people, tulips, spectacular cheese shops (Gouda anyone!?), the best Dutch apple pie ever, a food scene that embraces local and sustainably grown produce, and a place where a growing number of chefs has declared themselves, “ambassadors for nature.” (I love that.) Recently, I traveled to the quaint Dutch capital for Food 3000, an annual educational meeting for food and nutrition communicators. 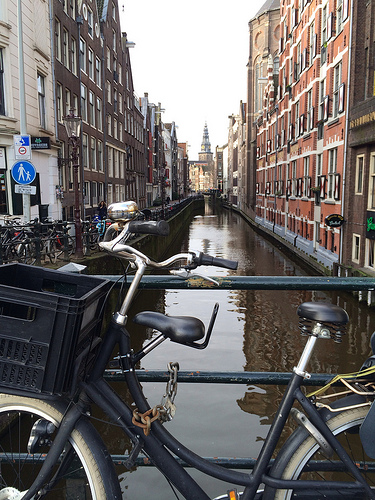 Disclosure: Our attendance at the conference was paid for, in part, by Porter Novelli and various co-sponsors. All opinions and insights in this post are my own. 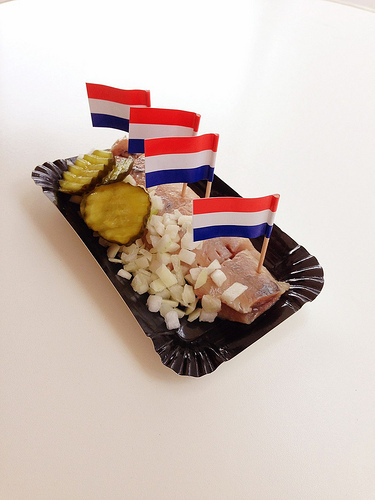 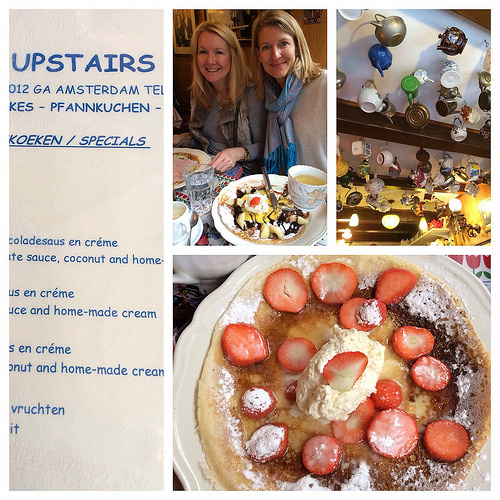 … and I had pancakes from a place called, Upstairs. Those are some of my dietitian pals in the picture: Carolyn O’Neil, author of Slim Down South and Kate Geagan, author of Go Green, Get Lean. And that’s a Valentine’s Day pancake topped with strawberries and whipped cream (just in case you were wondering). 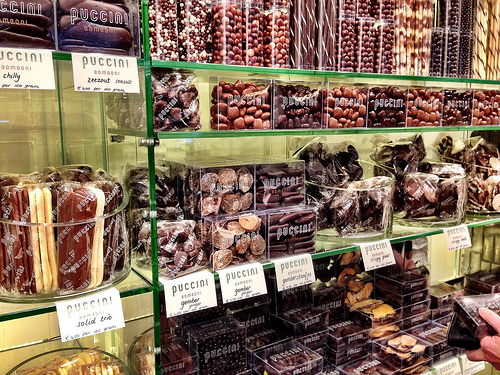 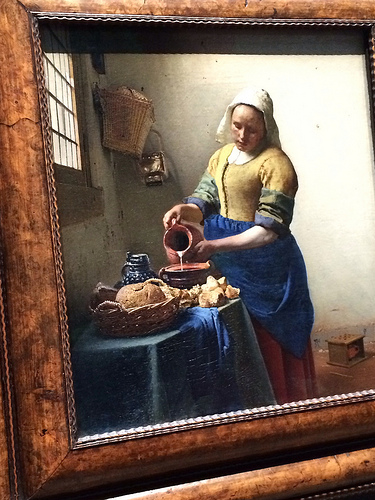 … and feasted my eyes on priceless works of art like The Milkmaid by Vermeer, on display at the Rijksmuseum. 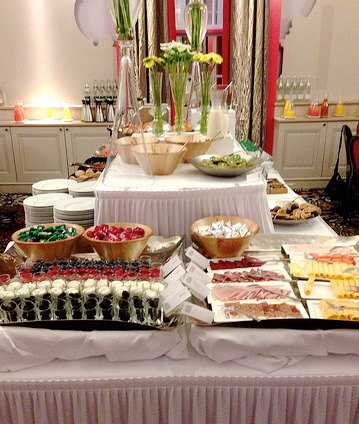 Breakfast is the most important meal of the day, and The Grand Amsterdam where I stayed put out quite the morning spread of savory dishes—roasted mushrooms and tomatoes, smoked salmon, salads, and cheeses—as well as Greek yogurt and fresh fruit.

I spent the bulk of our days attending scientific sessions where I learned about nutrient shortfalls in the U.S. diet (vitamin E, potassium, vitamin B6 to name just a few), the nutritional power of mushrooms (they’re loaded with antioxidants), and I had a lively debate about processed foods and the negative feelings they conjure up. I debated if there might be a better way to frame them or perhaps differentiate them since many “processed” foods are actually quite nutritious (i.e. canned beans, orange juice, fortified whole grain cereals). And after long days using my brain, I treated my stomachs to delicious Dutch meals at night. 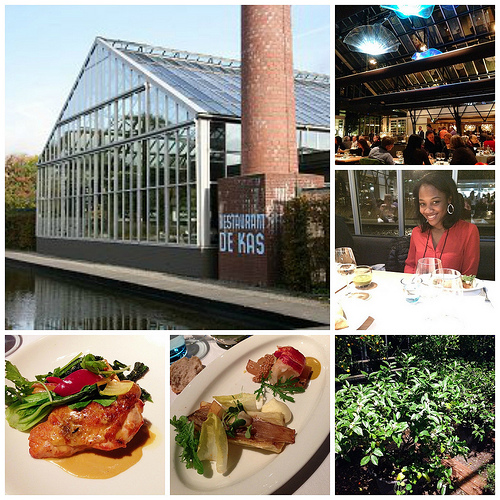 Restaurant De Kas was originally an old greenhouse, dating back to 1926, that belonged to Amsterdam’s Municipal Nursery. The menu at De Kas changes almost daily based on the seasonal ingredients from its own gardens. The main dish at my group’s dinner was roasted guinea fowl with bok choy, cavolo nero (AKA black leaf kale), potatoes and warm remoulade sauce. I love vegetables, so I was very happy. (That’s fellow RD Marisa Moore in the photo.) 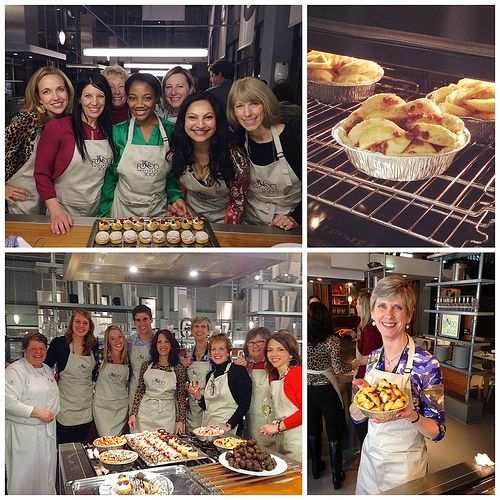 A highlight from Amsterdam was a field trip to De Kookfabriek where I had an opportunity to don aprons and bake up traditional Dutch apple pies (along with a few other decadent Dutch treats). I did this BEFORE dinner. Placed into groups of eight, I battled it out to see who could make the best Dutch apple pie. And you guessed it: Everyone was a winner! Oh, and there was lots of butter in the crust. (I have been trying to give the recipe a makeover, but sometimes you just can’t mess with tradition.) 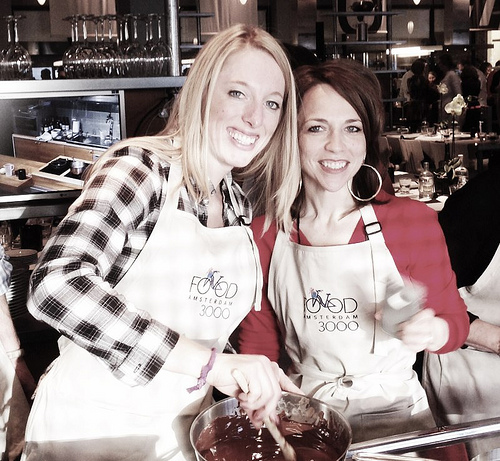 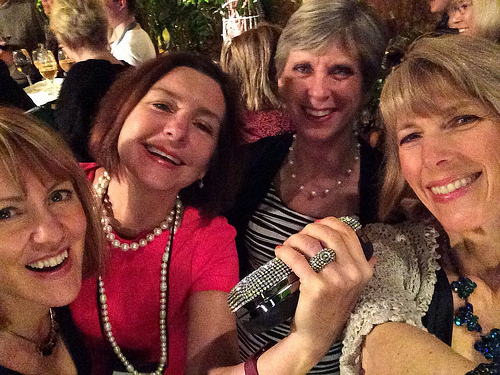 On my last night in Amsterdam, I headed off to the Garden of Amsterdam (The Arendshoeve) for a meal created by Chef Jonathan Karpathios, an advocate for the farm to table movement, author of Real Food, and owner of Vork & Mes. That’s Sharon Palmer in our selfie, author of The Plant-Powered Diet and Cheryl Forberg, dietitian for The Biggest Loser. 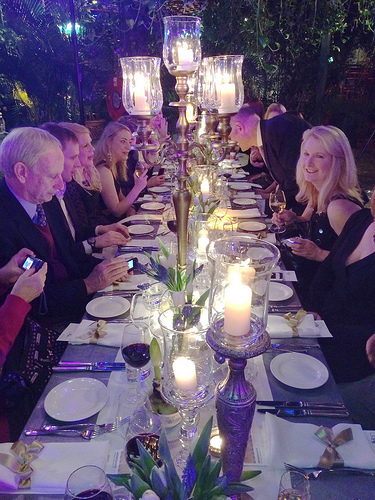 What a beautiful setting; it felt like I was at a wedding 🙂 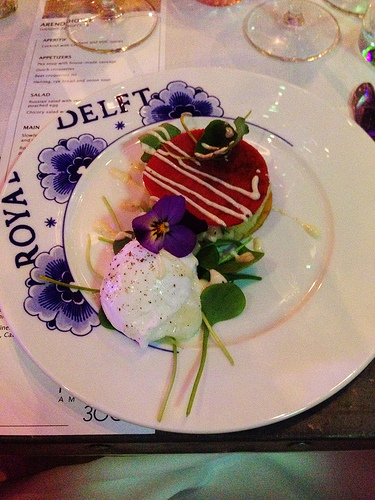 This was our appetizer, featuring ingredients sourced from the chef’s own gardens and farm partners: Russian Salad with Vegetable Pancakes and Poached Egg. 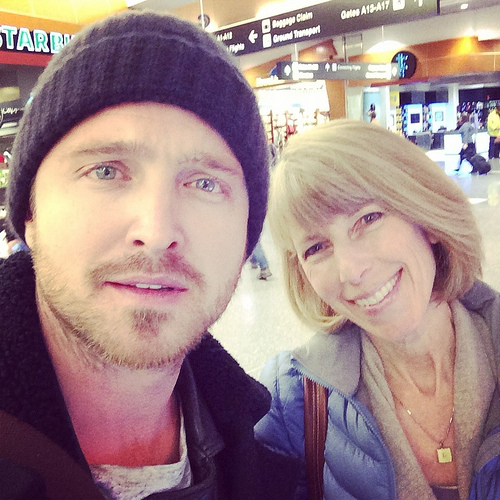 On a final note, I ran into Breaking Bad actor, Aaron Paul at Logan Airport before I flew to Amsterdam. He was kind enough to agree to a selfie. In fact, he took this photo, which he’s clearly done before. Just had to share …

#ad June is Brain Health Month. I partnered with @